“We don’t want to believe that our new toys to which we are so attached—and which bring in enormous profits—could also cause our demise or that of our children. But science is not about belief. Governments’ responsibility to their citizens should not be either.” David Servan-Schreiber, MD, PhD, 1951-2011, preface to Disconnect

When the talented physician-author Servan-Schreiber wrote those prophetic words he was lucky. It had been 18 years since he had been diagnosed with a brain tumor incidental to an MRI. The book describing the anti-cancer program he developed had sold several million copies and may well have extended his life. Most brain tumors remain hidden and are only diagnosed after metastasizing into seizures or strokes. David’s luck ran out last year, when he died of a glioblastoma—spreading malignant tumor of the brain. Was it merely a coincidence that he had used one of his three cellphones held close to his head regularly for more than a decade before developing this fatal brain tumor? The WHO (World Health Organization) thinks not, having recently declared cellphone and other wireless radiation a “possible human carcinogen,” adding them to a list that includes some pesticides, engine exhausts and solvents. While we cannot be certain whether cellphone radiation may have promoted or caused the tumor that took his life, that is a highly plausible explanation.

In America today, about 20 million children under the age of 14 have cellphones, and the CDC reports that one-fifth of all 2 year olds reportedly spend two hours a day in front of a screen. Increasingly, scientists and policy makers in tech-savvy nations like Israel and Finland are concerned that the ways these devices are used imperil the brain. The iPhone plastic baby rattle case protects the phone’s glass screen from cracking when dropped or chomped on by teething inquisitive babies, but does not protect the infant’s young brain from the phone’s pulsed digital microwave radiation.

Cell phones have revolutionized the ability to carry out research and promote public health interventions. But, there’s growing recognition in technologically advanced nations that we need to get smarter about how we use these and other wireless devices. Fine print warnings that come with all smart phones today advise not keeping phones in the pocket or next to the body — advice that is typically ignored. Growing numbers of national authorities, from Israel to France and Russia are making concerted efforts to promote awareness of the need to Practice Safe Phone. 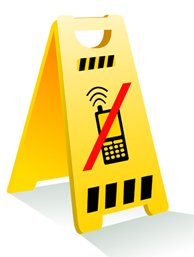 The proliferation of wireless gadgets overlooks a critical health issue: non-ionizing or microwave radiation at levels that do not induce measurable changes in temperature can change and damage the brain and sperm of experimental animals. A cellphone is a two-way microwave radio with intermittent and destabilizing pulses, unlike microwave ovens that steadily operate at the same frequencies at much greater power. The weak and erratic microwave radiation from cellphones and tablets cannot directly break the bonds that hold molecules together, but does disrupt DNA, weaken the brain’s protective barrier and release highly reactive and damaging free radicals. A 5 year old’s brain, healthy or otherwise, is encased in a thinner skull and contains more fluid than an adult brain. According to studies carried out by industry modelers in Switzerland and France, the bone marrow of a child’s head absorbs 10 times more radiation than an adult, while that of infants and toddlers will absorb even more. Few parents realize that infant apps such as One Fish Two Fish, Peekaboo Farm, and Twinkle Twinkle Little Star may do much more than amuse and distract babies. The American Academy of Pediatrics cautions that children need more real face time than screen time; more laps than apps.

The brain cancer story remains complex, because the disease has a long latency—up to four decades—and because past uses and users differ radically from current ones.

Distance is your Friend

What can you do to protect yourself from radiation emitted from high tech gadgets? Fortunately, industry has begun to issue more warnings. Samsung provides this advice: “Your mobile device is not a toy. Do not allow children to play with it because they could hurt themselves and others, damage the device, or make calls that increase your mobile device bill. Keep the mobile device and all its parts and accessories out of the reach of small children.”

For more information, I recommend:

Devra Davis is the founder of the Environmental Health Trust, an organization dedicated to providing basic research and education about environmental health hazards and promote constructive policies locally, nationally and internationally. Dr. Davis lectures at Georgetown and Harvard, and is the Founding Director of the Center for Environmental Oncology and University of Pittsburgh Cancer Institute. Her new book Disconnect (selected by TIME magazine as a top pick) provides shocking detail about cell phone radiation and your health.