On July 24, a group of prestigious epidemiology societies issued a powerful position statement, calling for a global ban on asbestos. The Joint Policy Committee of Societies of Epidemiology, comprising 13 national and international epidemiology organisations, specifically called on Canada and the three other asbestos exporting countries – Brazil, Kazakhstan, and Russia – to respect the right to health of all citizen of the planet and to stop exporting a known deadly substance that has already caused hundreds of thousands of unnecessary deaths. 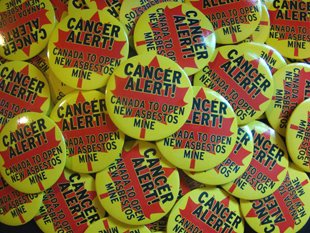 Over 150 public health organisations, unions, victims groups and individual scientists from twenty countries have already endorsed the statement, which is presently being translated into French and Portuguese.

As well as providing detailed information on the latest scientific research on the risks to health posed by asbestos use, the position statement exposes the way that the asbestos industry, using the same tactics as the tobacco industry, has undermined public health policy. It notes that the asbestos industry has funded and manipulated research to manufacture findings favourable to its own interests and has set up front organisations, such as the recently closed Chrysotile Institute in Montreal, the Russian Chrysotile Institute, and the Brazilian Chrysotile Institute. While these organisations claim to be expert scientific institutes, in reality, as noted in the position statement, they are lobby groups promoting the continued use of asbestos.

“Thus,” state the epidemiologists, “although the scientific evidence is overwhelming that all use of asbestos should stop, the asbestos industry denies the science and uses its political influence, particularly in Brazil, Canada, India, Kazakhstan, and Russia, to defeat efforts by public health officials to end the use of asbestos.”

The epidemiologists note that in June 2010, at a MERCOSUR Meeting of Health Ministers, the Ministers of Health of Argentina, Brazil, Paraguay, Uruguay, Venezuela, Bolivia, Chile, Ecuador, and Peru signed a Declaration to implement policies that would prohibit the import, mining, production and trade of asbestos. It is significant, notes the Position Statement, that to date, the Ministers of Health of Bolivia, Brazil, Ecuador, Paraguay, Peru, and Venezuela have not been able to achieve a ban on asbestos in their countries. Only Argentina, Uruguay, and Chile have defeated the efforts of the asbestos lobby and banned asbestos.

The position statement notes how, when health professionals in developing countries seek to implement a ban on asbestos, the global asbestos lobby intervenes to crush their efforts. 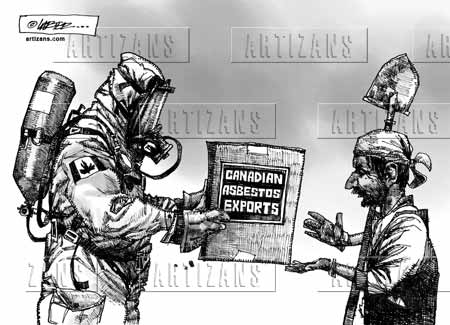 In March 2011, the Department of Occupational Safety & Health of Malaysia, for example, held hearings regarding its proposed ban on all forms of asbestos. Consensus was reached in support of the ban. However, the International Chrysotile Association, a Quebec-based lobby group for the global asbestos industry, hired a powerful international public relations company – APCO Worldwide (whose head office is in Washington, D.C.) – to lobby for the exclusion of chrysotile asbestos from the proposed ban. Chrysotile asbestos represents 100% of the global asbestos trade, so excluding chrysotile asbestos from the proposed ban would have rendered the ban totally useless. Progress to move ahead to ban all forms of asbestos in Malaysia appears to have been effectively blocked.

The asbestos industry has also used the tactic of legal intimidation against scientists and academics to silence them regarding the threat to health posed by the use of chrysotile asbestos. The position statement notes that this tactic is presently being employed in India, Brazil, and Thailand and it urges epidemiology and public health organisations to support the right of scientists and academics to carry out their work free from intimidation.

Premier Charest and Prime Minister Harper:
A flagrant example of the corruption of public health policy by the asbestos industry

Premier Charest and Prime Minister Harper provide a flagrant example of how the asbestos industry has corrupted public health policy. Charest and Harper refuse to heed the recommendation of the Quebec government’s own top health authorities, as well as Quebec’s and Canada’s medical experts, to stop the mining, use and export of asbestos. Likewise, Charest and Harper are now thumbing their noses at this latest call from the national and international epidemiology societies to ban asbestos.

The asbestos lobby is clearly in control of public policy regarding asbestos, both at the Quebec and Canadian level. This is not what democracy is supposed to look like. And not only is this a disaster for public health, it is also an appalling misuse of public funds.

The last two asbestos mines in Quebec are shut down and bankrupt. However, for several years the president of Jeffrey mine in Asbestos, Quebec tried, without success, to raise the $83 million needed to render operational the Jeffrey underground asbestos mine and thus revive the Quebec asbestos trade. Finally, in November 2010, a consortium of international investors, led by Montreal businessman, Baljit Chadha, made an offer to purchase Jeffrey mine, on condition that the Quebec government provide a loan guarantee to cover 70% of the cost ($58 million).

It didn’t work. Even though the $58 million loan was backed by the government of Quebec, not a single financial institution would provide the loan. In a desperate measure, on June 29, at 4 pm on the Friday of a holiday weekend, the Quebec government announced that it would step in and would itself give the $58 million loan to Jeffrey mine.

Chadha’s financial problems were still not over, however. All the previous investors had got cold feet and had bailed out. He was now able to come up with only one investor, Ulan Marketing Co. Ltd., a Thai company to whom Chadha has shipped asbestos from the Jeffrey mine for over 20 years. A company made up of Chadha and Coulombe, Mineral Fibre Inc., now owns the Jeffrey mine. It has put up $11 million and Ulan has invested $14 million, so as to reach the $25 million.

Ulan is part of the Oran Vanich family of companies and is heavily involved in trying to defeat this initiative to stop the use of asbestos in Thailand. The president of Oran Vanich, Kriewsakul Uran, tells the people of Thailand that there is, to date, no evidence that asbestos can cause death.

This disreputable company, disseminating such grotesque lies, is now the key investor and saviour of the Jeffrey mine.

Guy Versailles, public relations agent for Chadha and Coulombe, believes that the asbestos industry will defeat the efforts of the National Health Commission, just as it has defeated the effort of Quebec’s public health authorities.

In Quebec, however, there is growing outrage that the Charest and Harper are acting like shameless hooligans on the world stage and that Charest is throwing public money at the deadly, bankrupt asbestos industry.

Our challenge as citizens is to end the corruption of Quebec and Canadian public health policy by the asbestos industry and to defend the right to health of all people everywhere.

If we do not, people in Thailand, India and elsewhere will pay the price with their lives.