Since the early 1990s, October has been breast cancer awareness month. The original goal, to promote prevention of breast cancer, has been hijacked by industry, and the pink ribbon is now on products from cosmetics to cars and gasoline, many of which contribute to breast cancer in the first place. While breast cancer certainly doesn’t carry the same stigma it once did, and there are better treatments available, about 5,000 Canadian women die from the disease each year.(1) The lifetime risk of getting breast cancer has actually increased –from 1 in 10 in the 1970s to 1 in 9 today. Despite years of ‘awareness-raising,’ research into prevention still garners only 2.6% of total public dollars spend on cancer research in Canada.(2) 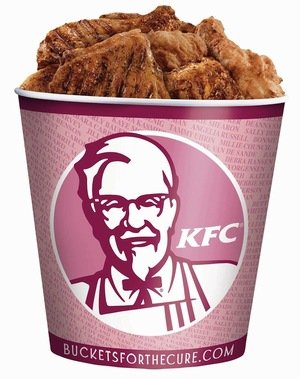 Almost as long as pink ribbon campaigns have been going on, Breast Cancer Action, based in San Francisco, California has been asking tough questions about their effect – “Pinkwashing.” They have created the Think Before You Pink toolkit, designed to help you:

BCAction is looking for changes to the ways the breast cancer industry does business; action that regulates toxic substances; and action that holds corporations responsible for the ingredients in their products that increase a woman’s risk of developing breast cancer. As they say, “Action speaks louder than pink.”

Prevent Cancer Now very much supports this approach. We encourage you to download the Think Before You Pink toolkit and take action. The quiz below, reproduced with permission, is an excellent way to start a conversation with your family and friends.

Think Before You Pink Quiz

2. True or False: Purchasing a product with the pink ribbon label guarantees money will be given to breast cancer causes.

3. True or False: National Breast Cancer Awareness Month (NBCAM), filled with pink ribbon promotions and breast cancer related events, was in part created by AstraZeneca, a pharmaceutical and biologics company that developed an herbicide considered to be a carcinogen by the U.S. Environmental Protection Agency.

5. Can you guess which of the following is not a true pink ribbon item, i.e., it was not marketed to customers with the claim that the company was donating profits to breast cancer awareness?

a. Pink bottle of vodka

1. False! In the early nineties, Charlotte Haley, a 68-year-old woman who watched her sister, daughter, and grandmother suffer from breast cancer, was the first to use a ribbon to advocate for breast cancer. Haley distributed peach ribbons in a grassroots effort to spark conversation about the breast cancer epidemic. Each set of five ribbons came with a card saying: “The National Cancer Institute’s annual budget is $1.8 billion, only 5 percent goes for cancer prevention. Help us wake up our legislators and America by wearing this ribbon.” Upon hearing of Charlotte Haley’s campaign, the editor of Self magazine approached Haley with an offer to use the peach ribbon as part of the magazine’s second annual breast cancer awareness issue. Haley turned down the offer, saying she was not interested in having her peach ribbon grassroots campaign used by large corporations. To avoid property theft, Self changed the color of the ribbon to pink. In the fall of 1992, Self and partner Estée Lauder distributed over 1 million ribbons at makeup counters, all void of any calls for prevention or better fund allocations.

3. True! AstraZeneca, a pharmaceutical and biologics company, is a principal sponsor of National Breast Cancer Awareness Month (NBCAM). The NBCAM website and event encourages women to take part in self–breast exams and mammography testing, but messages and information about the causes of breast cancer and its environmental links go unmentioned. This is not surprising since AstraZeneca manufactures chemicals, including the cancer-causing herbicide acetochlor. AstraZeneca also manufactures two of the most popular breast cancer drugs in the United States, Nolvadex (tamoxifen) and Arimidex (anastrazole).

4. The following two companies are corporate sponsors of breast cancer awareness events:
Chevron is the largest industrial polluter in Richmond, California, releasing approximately 29 billion pounds of toxic chemicals every year. The Richmond area has a disproportionately large burden of industrial pollution and high rates of asthma and cancer. Chevron creates an annual breast cancer awareness car and is a sponsor of Susan G. Komen Race for the Cure local affiliates. CKE Restaurants is an international quick-serve restaurant chain that includes Carl’s Jr. The company partners with the National Breast Cancer Foundation, Inc., to display commemorative pink Happy Star™ cutouts in restaurant lobbies, along with distributing $10 coupons for every $1 donated at restaurants during the company’s annual May campaign. Fast food restaurants are disproportionately located in low-income communities that are underserved by grocery stores, where residents often struggle to stretch their food dollars.

b. In one instance, the “artist” decided to take a Stag 15 gun and paint it pink, then raffle it, donating the profits to breast cancer research.

c. KFC and Susan G. Komen for the Cure partnered for “Buckets for the Cure,” a campaign that used the breast cancer epidemic to improve the American public’s perception of KFC and increase the company’s profits. KFC, like most fast food chains, is overwhelmingly present in communities that have poor health outcomes. BCAction called out the partnership and organized people like you to demand that Komen partner with corporations that don’t contribute to the breast cancer epidemic.

d. As with the marketing of alcohol to promote breast cancer awareness, a pink beer pong table was another effort by a company to promote its image among the American public by linking its products to a good cause.

e. Lip gloss along with many other cosmetics contain chemicals known as parabens and phthalates, which recent studies indicate may be linked to cancer development. Because testing is voluntary and controlled by the cosmetic manufacturers, many ingredients in cosmetic products are not tested for safety. The Environmental Working Group’s Skin Deep website states that 89 percent of ingredients used in personal care products have not been evaluated for safety.