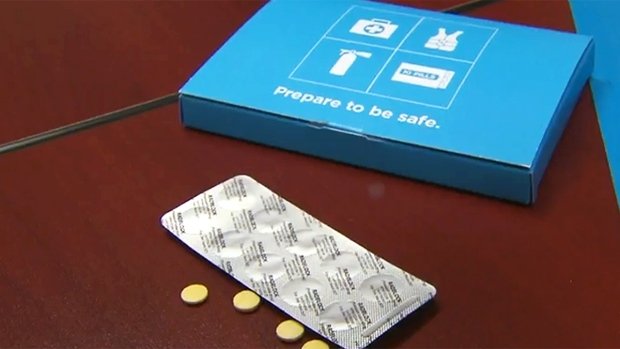 Prevent Cancer Now (PCN), along with over 20 organizations, made interventions to The Mayor and Executive Committee, Toronto City Council on Emergency Planning, for improved planning in the event of a large-scale nuclear accident in the Greater Toronto Area (December 1, 2015). The City Manager, in consultation with the Medical Officer of Health and the Office of Emergency Management, will report to the Executive Committee by March 16th, 2016. A key consideration would be Ontario Power Generation runs 10 nuclear reactors at Pickering and Darlington, within 10 and 40 km respectively of Toronto’s easterly city limit, on Lake Ontario.

Aging nuclear plants develop faults, the human designers, builders and operators are all fallible, and the chance of a large-scale accident is non-trivial. The 2009 Ontario provincial Ontario provincial nuclear emergency response plan was originally formulated pre-Chernobyl, and updated pre-Fukushima (2011) nuclear disasters. In Ontario, a 10 km primary response zone around reactors was established in the 1980s.

Within the 10 km primary zone, the Province maintains emergency measures, such as public alerting and detailed evacuation plans in the event of nuclear events. Potassium iodide (KI) pills may be available for no charge at pharmacies, to be taken in the event of a radioactive release. The pills flood the body with non-radioactive iodine, protecting people from radioactive iodine and thyroid cancer. Unfortunately, few people were taking advantage of this opportunity, leaving the majority of the population unprotected, so in October 2015 the Ontario Power Generator sent KI pills to all those living within the 10 km zones around the two facilities, as ordered by the Canadian Nuclear Safety Commission (CNSC). KI pills are available free online for those within 50 km of an Ontario nuclear reactor (www.preparetobesafe.ca).

Toronto Councillors wrote, “The Ontario government plans to spend billions to extend the operational lives of nuclear power plants therefore, if these reactors continue to operate, it is clearly in the best interest of Torontonians that there be transparent and comprehensive emergency plans in place to ensure public safety.”

This follows on the heels of direct action by Durham Region, asking the provincial government to consider expanding nuclear primary response and evacuation zones, to provide all the science considered in nuclear emergency planning, and to upgrade nuclear emergency planning in a transparent, evidence-based process. The CNSC is considering standardizing response zones nationally, including pre-distribution or stockpiling KI pills. They are pre-distributed in a 20 km zone around Point Lepreau nuclear power plant in New Brunswick, and an 8 km zone around Gentilly-2 in Quebec, as it is being decommissioned.

An obvious question is: how big should the primary zone be? Learning from past nuclear disasters and based on emergency modeling, Switzerland has pre-distributed KI to all people living within 50 km of its nuclear plants. Belgium’s Conseil Supérieur de la Santé recommends additional pre-distribution to pregnant women residing within 100 km of the country’s nuclear plants. In some countries, pregnant women, children and persons in schools are considered vulnerable populations and are included in a 100 km radius for KI distribution.

In stark contrast, recent CNSC modelling of a nuclear emergency at Darlington optimistically assumed that lessons from Fukushima would all be acted upon and releases from any possible mishaps and malfunctions would be so small that the primary zone and evacuation might be necessary only within a very few kilometres, much less than the current 10 km primary zone. In the CNSC scenario of radiation releases as little as 100-fold lower than Fukushima, the report concludes that the numbers of related cancers would not be significant above the current regional lifetime cancer incidence of 49% (a figure that itself may raise eyebrows). The only exception might be child thyroid cancer – the target of KI distribution. Prevent Cancer Now agrees with Dr. Cathy Vakil in her deputation on behalf of the Canadian Association of Physicians for the Environment (CAPE), that as in other jurisdictions with greater protections in place, Fukushima scale releases must be modeled and emergency measures designed accordingly. In other words, a study of the health impacts of an accident with Fukushima-scale releases needs to be complete in order to be able to assess the emergency measures required in Ontario.

While iodine is an important element released during nuclear accidents, other radioactive, cancer-causing elements are released, for which we do not have similar protective actions. Beyond KI pills, emergency planning and response are much larger and more complex, including the need for competency in radiation protection and monitoring, and education of healthcare providers, emergency responders, medical services, and the public. Nuclear preparedness is complex and multi-jurisdictional, according to the 2013 CNSC Master Plan and federal nuclear safety website.

It is expected that Toronto’s forthcoming report will address such broader issues.

It is impossible to draw a “safe” line for emergency response in the case of nuclear disasters, and emergency responses seldom if ever proceed as smoothly as idealised. Thus, PCN encourages energy efficiency and shifting to less-hazardous, renewable sources. Nuclear power plants will be around for a long while, and their legacy will be with us immeasurably longer, so we must be alert to their hazards. Over time, one of the greatest hazards may be complacency.

Dorothy Goldin Rosenberg PhD, MES, is an education and film consultant/producer, who researches, writes and speaks on environmental health, equality, social, economic and environmental justice, peace and energy issues. She teaches Environmental Health, Transformative Higher Education, and Policy Change: Education for Social and Ecosystem Healing at OISE/UofT. She is a board member of Prevent Cancer Now, and a member of a number of other health, environmental and peace organizations.

Not only does nuclear power pose risks from routine by-products such as tritium [see: http://tinyurl.com/2015-12-H] and…