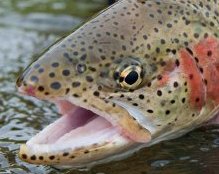 Half my life ago, I took a leave of absence from graduate work and traveled to East Africa. There I joined a human rights project investigating the interconnections between famine, warfare, and environmental degradation. I began my research along the Blue Nile River in a downstream refugee camp, where I interviewed refugees from the mountainous communities upstream.

One afternoon, an elderly farmer arrived in the camp. He was said to have witnessed a hillside slide into one of the Nile’s tributaries—after the army had built a road for tanks. According to rumor, the resulting siltation had forced the population of an entire village to flee. Their fish all died, my translator supposed.

I went looking for this man and asked if he would grant me an interview. He said yes, but on one condition. He wished also to interview me. Laughing, I agreed. So, after he had described for me the destruction of a river that had made him an environmental refugee, he turned the tables.

Tell now about the rivers in your homeland, he asked.

I was happy to oblige. My father built the house I grew up in on the east bluff of the Illinois River. I described this river to my interviewer—its barges, bridges, and sandy banks—and told him that it was my most beloved landscape. Just like his river was for him.

He pursued me further.

Tell now about the fish in your American river. How do they taste to you?

This was a question I could not answer. In all the years I lived in Illinois, the fish were so contaminated that government advisories warned us against eating them. I turned my thoughts to other rivers I had lived near—the Mackinaw River, the Huron River, the upper stretches of the Mississippi—and realized that they too carried fish advisories. In fact, I had never eaten fish from any river. Ever.

My reply was translated, and my new friend grew quiet. After a long silence, he asked me another question I could not answer:

So why are you here in Africa?

The truth was that I had just passed the five-year mark of my diagnosis with bladder cancer, a disease with known links to the environment. Untethered from hospitals at last, I didn’t want to think about cancer anymore. I was eager to travel abroad and do field research on—well—ecology and human health.

The irony was not lost on my new friend. He explained that he and his people were already organizing against the men who had poisoned their river—and were planning to return home as soon as possible and drive out the army.

You must go home, too, he said solemnly, and confront the ones poisoning your river. Go talk to your fish.

I like to think that I did. Living Downstream, the book and the film, is the result. The very words living downstream are intended as a statement of gratitude to that anonymous Ethiopian farmer who first encouraged me to go home and confront sources of pollution in my own community. And since the release of the first edition of the book in 1997, I’ve had the chance to travel with Living Downstream to many other communities. From my conversations in auditoriums and church basements across several time zones, I’ve made three observations.

The first observation is that science and citizen activism can work hand in hand. Throughout the 1990s, for example, women with breast cancer asked the research community important questions about the possible role of environmental pollutants in cancer causation—and insisted on answers. Scientific research was redirected by these questions and funding was channeled down new lines of inquiry.

My second observation is that most people are intensely curious about the ecology of their own community—especially if they perceive that its integrity is threatened. In my Illinois hometown, public hearings on the proposed expansion of a hazardous waste site drew a standing-room-only crowd. When residents learned that the dump was located overtop the drinking water aquifer, they became deeply interested in learning about the geological deposits of sand and quartz that make up that aquifer.

My third observation is this: what too often dampens all this cooperation and natural curiosity is a paralyzing blanket of fatalism. Fearful of despair, many people decide to not investigate environmental contaminants. That attitude runs counter to the fighting spirit that cancer patients bring to their medical lives. They have convinced themselves that these problems are intractable and unsolvable, so why learn about them? Instead of defeatism, why not bring that same bravery and hopeful determination to the circumstances of our environmental lives?

When caring for the critically injured, emergency responders are trained to say, I’m not giving up on you. That’s the same message an Ethiopian farmer encouraged me to carry back to the place where I grew up. Surely it’s a phrase that applies to all the communities where we live. Our fish. Our rivers. Our homes.

Ecologist, author, and cancer survivor Sandra Steingraber is an internationally recognized authority on the environmental links to human health. She is the author of Living Downstream, published in second edition by Da Capo Press to coincide with the release of the documentary film adaptation.

NOTE: In 2010, Canadian filmmaker Chanda Chevannes released a documentary adaptation of Sandra Steingraber’s book, Living Downstream. Since then, the film has won multiple awards and has had over 200 public screenings. It is currently available on Educational DVD for use by educational institutions and nonprofit organizations (and will be available as a Home Video DVD release soon). As an accompaniment to the Living Downstream Educational DVD, Sandra and Chanda have just released Living Downstream ~ In the Community, a 200-page guide for nonprofit organizations and grassroots activists who are using the film to inspire change in their communities. The essay above appears as a foreword in that guide and has been made available for reproduction by the author.