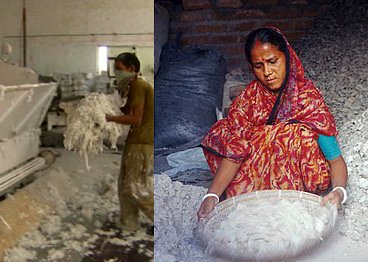 In 2012, after more than 100 years, Canada stopped mining and exporting asbestos. Public health experts had called on the Canadian and Quebec governments to respect the scientific evidence that all forms of asbestos cause harm to health and to stop supporting this deadly and dying industry. The Parti Québéois government, in power in Quebec at the time, heeded their call. It cancelled a $58 million loan that the previous Charest government had given to asbestos industrialists to re-open the Jeffrey mine at Asbestos, Quebec, and export millions of tons of asbestos overseas.

Without financial support from the Quebec government, the mine was unable to re-open. The battle to stop the mining and export of asbestos was won.

The previous Harper government, however, strongly supported the asbestos trade and today Canada’s official policy still supports the use of asbestos. Asbestos is the biggest occupational killer of Canadian workers, yet millions of dollars’ worth of asbestos-containing goods are imported into Canada every year, posing increased risk of harm to the population.

Furthermore, pro-asbestos propaganda, created in Canada over the past three decades with the use of millions of dollars of public funds, continues to be the most powerful weapon used to promote the sale of asbestos in the global South. This material, claiming that chrysotile asbestos is a wonderful product that can be “safely used”, states that its use is supported by the Canadian government.

In addition, the lobby organisation for the global asbestos industry, called the International Chrysotile Association (ICA), continues to operate out of Quebec. In just the past year, the ICA has held asbestos-promoting events in India, the Philippines, Malaysia, Vietnam, Pakistan and Sri Lanka.

It is therefore of critical importance, both for people in Canada and for people around the world, that the new Trudeau government end Canada’s shameful role of global asbestos promoter.

The government’s response is eagerly awaited.